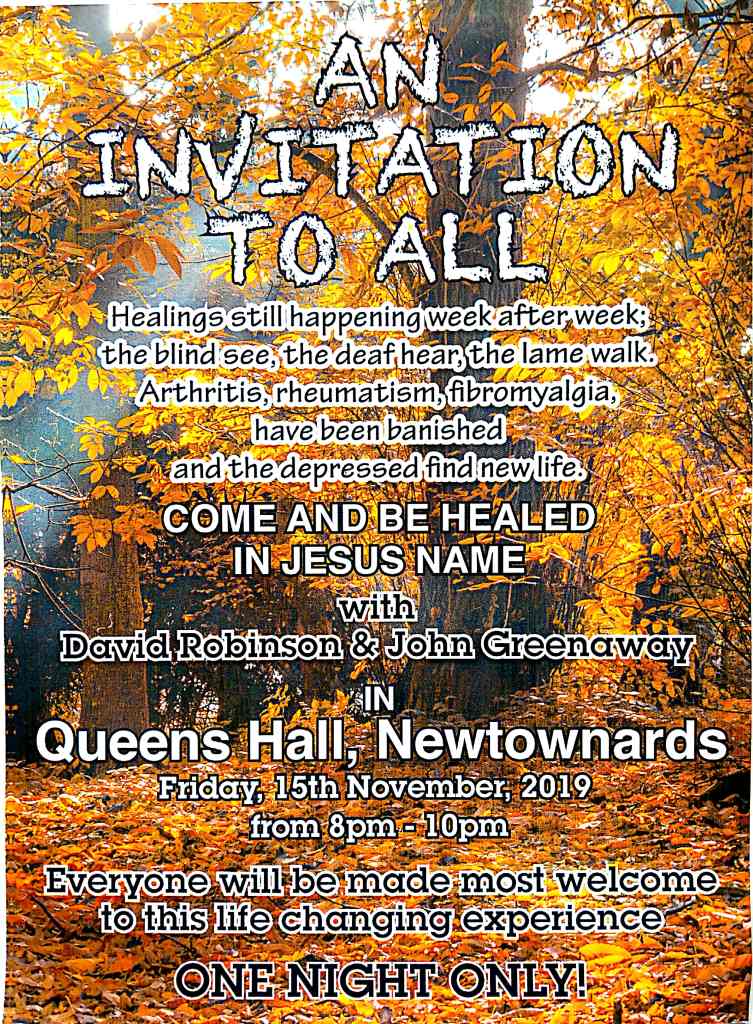 Hebrews Chapter 13 verse 8
Jesus Christ is the same yesterday, and today and for ever.

17 And these signs shall follow them that believe; In my name shall they cast out devils; they shall speak with new tongues;

18 They shall take up serpents; and if they drink any deadly thing, it shall not hurt them; they shall lay hands on the sick, and they shall recover.

Matthew 8:16
When evening came, they brought to Him many who were demon-possessed; and He cast out the spirits with a word, and healed all who were ill.

Matthew 12:15
But Jesus, aware of this, withdrew from there. Many followed Him, and He healed them all,

Matthew 14:14
When He went ashore, He saw a large crowd, and felt compassion for them and healed their sick.

Matthew 14:36
and they implored Him that they might just touch the fringe of His cloak; and as many as touched it were cured.

Matthew 12:10
And a man was there whose hand was withered. And they questioned Jesus, asking, “Is it lawful to heal on the Sabbath?”–so that they might accuse Him.

Matthew 15:30
And large crowds came to Him, bringing with them those who were lame, crippled, blind, mute, and many others, and they laid them down at His feet; and He healed them.

Matthew 21:14
And the blind and the lame came to Him in the temple, and He healed them.

Luke 4:40
While the sun was setting, all those who had any who were sick with various diseases brought them to Him; and laying His hands on each one of them, He was healing them.

Luke 5:17
One day He was teaching; and there were some Pharisees and teachers of the law sitting there, who had come from every village of Galilee and Judea and from Jerusalem; and the power of the Lord was present for Him to perform healing.

Luke 9:11
But the crowds were aware of this and followed Him; and welcoming them, He began speaking to them about the kingdom of God and curing those who had need of healing.

Matthew 9:35
Jesus was going through all the cities and villages, teaching in their synagogues and proclaiming the gospel of the kingdom, and healing every kind of disease and every kind of sickness.

Matthew 19:2
and large crowds followed Him, and He healed them there.

Mark 3:10
for He had healed many, with the result that all those who had afflictions pressed around Him in order to touch Him.

Mark 6:56
Wherever He entered villages, or cities, or countryside, they were laying the sick in the market places, and imploring Him that they might just touch the fringe of His cloak; and as many as touched it were being cured.

Luke 6:18
who had come to hear Him and to be healed of their diseases; and those who were troubled with unclean spirits were being cured.

Acts 10:38
“You know of Jesus of Nazareth, how God anointed Him with the Holy Spirit and with power, and how He went about doing good and healing all who were oppressed by the devil, for God was with Him.

Luke 5:15
But the news about Him was spreading even farther, and large crowds were gathering to hear Him and to be healed of their sicknesses.

Mark 6:5
And He could do no miracle there except that He laid His hands on a few sick people and healed them.

Mark 7:37
They were utterly astonished, saying, “He has done all things well; He makes even the deaf to hear and the mute to speak.”

Luke 13:32
And He said to them, “Go and tell that fox, ‘Behold, I cast out demons and perform cures today and tomorrow, and the third day I reach My goal.’

Acts 9:34
Peter said to him, “Aeneas, Jesus Christ heals you; get up and make your bed.” Immediately he got up.

Isaiah 53:5
But He was pierced through for our transgressions, He was crushed for our iniquities; The chastening for our well-being fell upon Him, And by His scourging we are healed.

1 Peter 2:24
and He Himself bore our sins in His body on the cross, so that we might die to sin and live to righteousness; for by His wounds you were healed.

Matthew 4:24
The news about Him spread throughout all Syria; and they brought to Him all who were ill, those suffering with various diseases and pains, demoniacs, epileptics, paralytics; and He healed them.

Matthew 8:8
But the centurion said, “Lord, I am not worthy for You to come under my roof, but just say the word, and my servant will be healed.

Matthew 9:21
for she was saying to herself, “If I only touch His garment, I will get well.”

Mark 1:34
And He healed many who were ill with various diseases, and cast out many demons; and He was not permitting the demons to speak, because they knew who He was.

Luke 6:17
Jesus came down with them and stood on a level place; and there was a large crowd of His disciples, and a great throng of people from all Judea and Jerusalem and the coastal region of Tyre and Sidon,

Luke 6:19
And all the people were trying to touch Him, for power was coming from Him and healing them all.

Luke 7:21
At that very time He cured many people of diseases and afflictions and evil spirits; and He gave sight to many who were blind.

John 6:2
A large crowd followed Him, because they saw the signs which He was performing on those who were sick.

Luke 4:23
And He said to them, “No doubt you will quote this proverb to Me, ‘Physician, heal yourself! Whatever we heard was done at Capernaum, do here in your hometown as well.'”

Luke 13:14
But the synagogue official, indignant because Jesus had healed on the Sabbath, began saying to the crowd in response, “There are six days in which work should be done; so come during them and get healed, and not on the Sabbath day.”

Matthew 12:10
And a man was there whose hand was withered. And they questioned Jesus, asking, “Is it lawful to heal on the Sabbath?”–so that they might accuse Him.

Luke 14:3
And Jesus answered and spoke to the lawyers and Pharisees, saying, “Is it lawful to heal on the Sabbath, or not?”

Mark 3:2
They were watching Him to see if He would heal him on the Sabbath, so that they might accuse Him.

Luke 6:7
The scribes and the Pharisees were watching Him closely to see if He healed on the Sabbath, so that they might find reason to accuse Him.

John 7:23
“If a man receives circumcision on the Sabbath so that the Law of Moses will not be broken, are you angry with Me because I made an entire man well on the Sabbath?

John 9:14
Now it was a Sabbath on the day when Jesus made the clay and opened his eyes.

View all posts by Ards & North Down Christian Community Hub

This site uses Akismet to reduce spam. Learn how your comment data is processed.

Translate to your language of choice

Join Us on BAND